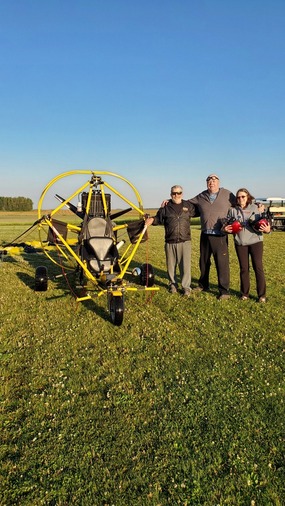 A powered parachute, often abbreviated PPC, and also called a motorized parachute or paraplane, is a type of aircraft that consists of a wing with a motor and wheels. The aircraft's airspeed is typically about 25–35 mph (40–60 km/h). PPCs operate safely at heights ranging from a few feet off the ground (“fly-bys”, a popular use of the aircraft) to altitudes as high as 10,000+ ft (3.05 km), but typical operating heights are between 500 and 1500 feet (150–500 meters) above ground level (AGL). Equipped with a 5-15 gallon fuel tank (depending on the engine and weight limitations), PPCs can typically be flown for about three hours before requiring refueling. They have very short take-off and landing rolls, sometimes less than 100 ft (30 m).

PPCs are among the least expensive aerial vehicles along with Powered Paragliders (PPG), and are considered a cost-effective way to become an aviator. The empty weight of a PPC can range from 200–500 lb (90–225 kg) and payload can be upwards of 500 lb (225 kg).There is often confusion about the differences between powered parachutes (PPC) and powered paragliding (PPG). From the ground, it can be difficult for the casual observer to distinguish between the two.

In simple terms, paragliders can be most easily recognized and differentiated by flight systems that use the hands to operate the steering controls, while PPC steering controls use steering bars pushed on by the foot. PPCs will always use a rolling airframe (also called a cart, trike, or quad, depending on the configuration), while a rolling airframe is usually considered a higher end option in paragliding. In addition, paragliders always use a higher performance wing that visually appears thinner and more elliptical. The design allows it to be launched by foot, perform more acrobatic maneuvers, and is capable of taking advantage of thermals or ridge lift in flight. 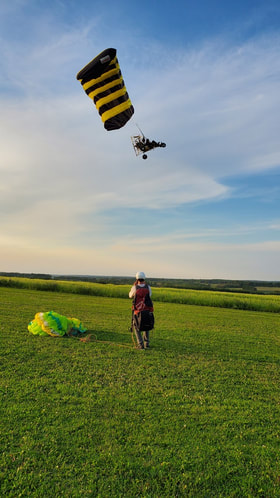 ​PPCs are often considered to be safer than normal fixed-wing or almost any other aircraft because of their inherent stability, limited response to control inputs, and stall resistance. The parachute is strategically attached to the airframe for maximum stability and aerodynamics. Design considerations make a powered parachute virtually impossible to stall, roll, dive or loop, and landing does not even require power.

There are two primary means to control a PPC: increasing or decreasing engine power (which controls vertical rate of climb) and deflecting the right or left trailing edge of the wing typically by moving the steering bars with the feet which turns the aircraft right or left.
​
The basics of flying a Powered Parachute can be learned in as little as 12-hours. It can be stored in a garage, and towed to the airstrip on an inexpensive trailer. And most maintenance can be performed by the owner.

In order to become a certified pilot you will need to
-Complete 30 solo flights
-5 hrs of flight time under instructor supervision
-Write and pass the PSTAR and ULTRA Transport Canada examination
-Medical class 1, 3 or 4
-20 hours of ground school
-Get a letter of recommendation from your instructor

Download File
We are proud to be dealers of one of the best Powered Parachutes equipment in the world.